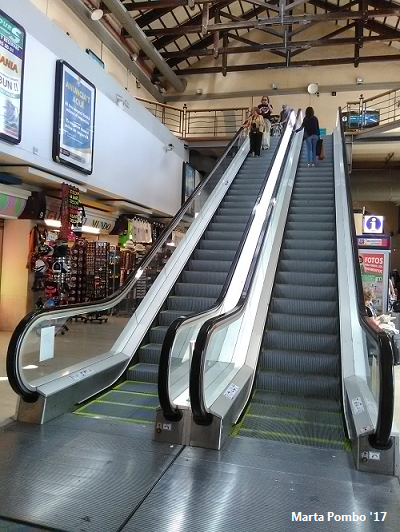 I hold my folding bike and slowly tread
On a different surface today, instead.
I enter a huge shopping mall,
A place I do not like at all.
Believe me, what is the point of my being here
If I dislike any mall’s atmosphere.
Figure out there are more humans who abhor such places
Of fat capitalism written on people’s faces.
Yet I’m here, the bike on my right hand,
As you will probably understand,
On the left I’m holding a good lock
To prevent a nasty robbery shock
If I wanted to park my bike outside
Though now I’m inside, the escalator my guide.
What happens next is most strange
As I witness a sudden change.
The escalator’s speed accelerates,
Something not everybody celebrates.
Some people are afraid to use it now
But I step on it, though afraid, somehow.
When I do so, all goes back to the ordinary
Even though this is bound to be just momentary.
As I’m almost down to exit the escalator
There’s a sudden explosion, who’s the perpetrator?
Smoke rising, in the escalator a big hole,
But no one’s been hurt, it all looks under control
Though underneath there seems to be fire too
And something’s disappeared out of the blue.
Believe it or not, just do as you like
The escalator has swallowed my bike.

View all posts by MOMENTS

4 thoughts on “The Escalator”